For the newest version of this module, please see this updated page.

In our Atomic Theory I: The Early Days module we learned about the basic structure of the atom. Normally, atoms contain equal numbers of protons and electrons. Because the positive and negative charges cancel each other out, atoms are normally electrically neutral. But, while the number of protons is always constant in any atom of a given element, the number of electrons can vary.

When the number of electrons changes in an atom, the electrical charge changes. If an atom gains electrons, it picks up an imbalance of negatively charged particles and therefore becomes negative. If an atom loses electrons, the balance between positive and negative charges is shifted in the opposite direction and the atom becomes positive. In either case, the magnitude (+1, +2, -1, -2, etc.) of the electrical charge will correspond to the number of electrons gained or lost. Atoms that carry electrical charges are called ions (regardless of whether they are positive or negative). For example, the animation below shows a positive hydrogen ion (which has lost an electron) and a negative hydrogen ion (which has gained an extra electron). The electrical charge on the ion is always written as a superscript after the atom's symbol, as seen in the animation.

The number of neutrons in an atom can also vary. Two atoms of the same element that contain different numbers of neutrons are called isotopes. For example, normally hydrogen contains no neutrons. An isotope of hydrogen does exist that contains one neutron (commonly called deuterium). The atomic number (z) is the same in both isotopes; however the atomic mass increases by one in deuterium as the atom is made heavier by the extra neutron.

Ernest Rutherford's view of the atom consisted of a dense nucleus surrounded by freely spinning electrons (see our Atomic Theory I module). In 1913, the Danish physicist Niels Bohr proposed yet another modification to the theory of atomic structure based on a curious phenomenon called line spectra.

When matter is heated, it gives off light. For example, turning on an ordinary light bulb causes an electric current to flow through a metal filament that heats the filament. This heats the filament and produces light. The electrical energy absorbed by the filament excites the atoms' electrons, causing them to "wiggle." This absorbed energy is eventually released from the atoms in the form of light.

When normal white light, such as that from the sun, is passed through a prism, the light separates into a continuous spectrum of colors:

Bohr knew that when pure elements were excited by heat or electricity, they gave off distinct colors rather than white light. This phenomenon is most commonly seen in modern-day neon lights, tubes filled with gaseous elements (typically neon). When an electric current is passed through the gas, a distinct color (most often red) is given off by the element. When light from an excited element is passed through a prism, only specific lines (or wavelengths) of light can be seen. These lines of light are called line spectra. For example, when hydrogen is heated and the light is passed through a prism, the following line spectra can be seen:

Each element has its own distinct line spectra. For example:

To Bohr, the line spectra phenomenon showed that atoms could not emit energy continuously, but only in very precise quantities (he described the energy emitted as quantized). Because the emitted light was due to the movement of electrons, Bohr suggested that electrons could not move continuously in the atom (as Rutherford had suggested) but only in precise steps. Bohr hypothesized that electrons occupy specific energy levels. When an atom is excited, such as during heating, electrons can jump to higher levels. When the electrons fall back to lower energy levels, precise quanta of energy are released as specific wavelengths (lines) of light.

Under Bohr's theory, an electron's energy levels (also called electron shells) can be imagined as concentric circles around the nucleus. Normally, electrons exist in the ground state, meaning they occupy the lowest energy level possible (the electron shell closest to the nucleus). When an electron is excited by adding energy to an atom (for example, when it is heated), the electron will absorb energy, "jump" to a higher energy level, and spin in the higher energy level. After a short time, this electron will spontaneously "fall" back to a lower energy level, giving off a quantum of light energy. Key to Bohr's theory was the fact that the electron could only "jump" and "fall" to precise energy levels, as measured in electron volts, or eV, thus emitting a limited spectrum of light. The animation linked below simulates this process in a hydrogen atom and displays the energy absorbed or released in eV units. 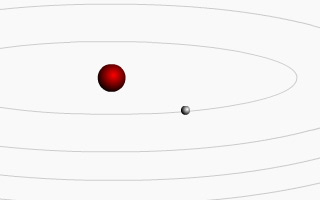 Not only did Bohr predict that electrons would occupy specific energy levels, he also predicted that those levels had limits to the number of electrons each could hold. Under Bohr's theory, the maximum capacity of the first (or innermost) electron shell is two electrons. For any element with more than two electrons, the extra electrons will reside in additional electron shells. For example, in the ground state configuration of lithium (which has three electrons) two electrons occupy the first shell and one electron occupies the second shell. This is illustrated in the animation linked below.

At their lowest energy level, electrons are

For further details, the table below shows the electron configurations of the first eleven elements.

This module is an updated version of our previous content, to see the older module please go to this link.

Focusing on advances in atomic theory over the past century, this module explores how Niels Bohr's discovery of line spectra led to his theory that each atom has multiple electron "shells" – the energy levels occupied by electrons. Ions and isotopes are defined, and the quantum behavior of electrons is demonstrated through animations.