Whenever a ray of sunshine twinkles through a window, an ant crawls across a sidewalk, or a car travels down a road there is a change in energy. Changes in energy take place so often that we take them for granted. Yet for thousands of years the concept of energy has been poorly understood. Ancient cultures associated fire with all forms of energy, and the Greek philosopher Heraclitus (~500 BCE) explained everything in the universe in terms of energy. In the centuries that followed, many scientists proposed theories to explain the concept of energy, but few shed any true light on the subject.

Then in 1686, the famous English mathematician and physicist Sir Isaac Newton outlined three axioms (or laws) that described the behavior of bodies in motion. Newton's "Laws of Motion" were the first accurate description of the forces that effect moving objects and thus they were the first accurate description of the energy possessed by moving objects (called mechanical energy). Newton's axioms laid the foundation of our modern understanding of energy and forces.

There are many different forms of energy: mechanical energy, electrical energy, heat energy, light energy, etc. Each of these different forms of energy shares in common the ability to cause some type of change or to do work. Energy is actually defined as the ability to cause change or do work. For example, when a ray of sunshine passes through a window it causes change by heating the interior of the house. Energy "does work" inside of an ant by allowing the ant to move its legs; in a car, energy allows the engine to do work by turning the car's wheels. Almost anytime something moves or changes, energy is used.

Some forms of energy can be described as having two different states. Potential energy is energy that is associated with an object's position relative to a field of force; it can be thought of as stored energy that is not yet in use. For example, when you lift a heavy weight and hold it above the ground, the weight has potential energy because of its position relative to the force of gravity pulling it downward. If the weight were dropped and began to fall toward the ground, the potential energy that it possessed would be converted into kinetic energy, the energy of motion. 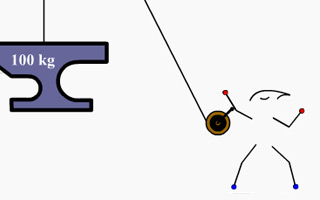 There are many different ways to measure the energy accompanying some type of change. One common way is to use a unit of energy called the joule. One joule is the amount of energy needed to lift a one-kilogram weight one meter in one second. The joule is named after the British scientist James Prescott Joule. Joule was one of the first scientists to show that one form of energy could be converted into other forms. In Joule's famous "paddle wheel" experiment he used a falling weight to pull a string that turned a paddle wheel submerged in a bucket of water. Joule found that the mechanical energy released by the falling weight was converted into heat energy by the paddle wheel. Joule measured the amount of heat energy absorbed by the water by recording the temperature of the water before and after the paddle wheel began moving (temperature is a way to measure heat energy and is discussed in the Temperature lesson). Joule found that the increase in water temperature was directly related to the amount of kinetic energy released. Joule thus showed that an exact relationship governs the conversion of one form of energy into another.

Through his experiments, Joule helped discover that energy is conserved during its conversion to other forms. The concept of energy conservation is now recognized as the first part of a series of laws that define the transfer and behavior of energy. These laws are called the Laws of Thermodynamics, and the first two are defined briefly below.

The First Law of Thermodynamics, sometimes known as the law of conservation of energy, states that energy cannot be created or destroyed; it can only be converted from one form to another. In other words, when Joule dropped the weight that turned the paddle wheel, the mechanical energy released was not wasted, it was converted into heat energy, thus causing the water temperature to increase. The first law of thermodynamics implies that the total amount of energy present in the universe is constant.

The Second Law of Thermodynamics is a bit more complicated and relates to the concept of entropy. Entropy is a measure of the disorder or randomness of energy and matter in a system. The second law of thermodynamics states that entropy always increases in a closed system. Practically speaking, this means that energy flows "downhill", from a higher state to a lower one. For example, if a hot and cold object are placed next to each other, heat will flow from the hot object to the cold object, and not in reverse. This also means that energy flows from high-grade forms (e.g. mechanical energy) to low-grade forms (e.g. heat). Joule's paddle wheel not only heated the water in the bucket, it also increased the entropy of the system by mixing the water and increasing its evaporation. The second law implies that the total entropy of the universe is always increasing.

All types of energy can cause change or do work. This module provides an introduction to energy in its various forms and states. Potential and kinetic energy are explained and demonstrated. The module describes Joule’s paddlewheel experiment, which shows how one form of energy can be converted into another, and presents the First and Second Laws of Thermodynamics.